Jetex motors provided a rich source of creative inspiration for designers. The models for which they produced kits and plans cover an astounding range of types. 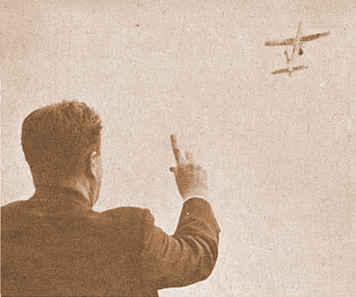 Left: Paul E. Del Gatto, one of the most imaginative and prolific of jetex designers launches his Jetex 150-powered model of the X-15.

Modelling with Jetex: Construction and operation

Paul Del Gatto, the eminent Jetex designer pictured above, shared his thoughts on modelling with Jetex in his book All about Jetex (publ. American Telasco, undated):

Moving the center or gravity rearward, whether by moving the engine back (preferred) or by adding ballast to the tail, may result in a slight decrease in the rate of descent; but at the same time it must be remembered that this might introduce a pitching moment (stall) in the climb, and in the descent pattern. With the introduction of turn in either direction, through the use of a vertical trim tab, this condition can be adjusted.

Powered flight should be arranged to obtain a straight, or nearly straight, climb. Setting the center of gravity (point of balance) of the Jetex unit (loaded) slightly forward of the model's balance point will assist in keeping the nose down under power.

In other words, a model should be trimmed for a slightly "nose heavy" condition until the charge bums away. To maintain a Jetex in a straight climb, it is best to offset the motor the side, twisting it with relation to the model's centerline, and compensating this by offsetting the rudder until this side thrust is neutralized.

Due to the motor's proximity to the center of gravity, very little side, or down, thrust can be achieved by swivelling the motor unless angles of about 10 degrees applied. Positioning the motor to one side of the model often proves more effective.

The limit on minimum size than becomes the amount of wing area required to produce a good and soaring glide path, plus maintaining a design that is capable of stability under excess power.

Regarding longitudinal stability, a good contest layout is often similar to an all-balsa hand-launch glider where the ship in trimmed with a minimum amount of longitudinal dihedral--the wing and tail being set as close as possible to zero-zero with relation to each other. This setting minimizes the possible chances in longitudinal stability between high-powered and slow-gliding flight. Obviously this means trimming with the center of gravity well aft, near the trailing edge of the wing, and reduces the "static margin" or inherent stability of the ship. Careful and patient flight adjustment is, therefore, essential for ultimate success.

"Flying Wing" designs are particularly suited to Jetex power. Models of this type, usually sensitive to torque, can be trimmed with relative ease if they are built large enough to handle the power. Note that the overall drag is considerably reduced, which means that the models should be built at least twice the size, in wing area, as conventional wing and tell ships. Longitudinal stability on wings is achieved through the use of "up-down" elevons or flaps making them sensitive to longitudinal trim because of the high/low speed pattern.

A small highspeed ship, therefore, will require a thrust line mounted fairly high above the wing and the exact amount can only be found by trial and error tests. This again emphasizes the need to build ships very large until the stability problem is resolved.

The high thrust/shorter duration Jetex 50-HT requires special considerations. To handle the higher thrust of this engine, longer moment arms and higher thrust lines must be employed (just as with freeflight gas models). Wing sections must be thinner, and double-surfaced wings are common. Structures must be generally sturdier.